Literally, writing with color. In scientific practice, chromatography is a set of processes by which a mixture is separated into its component parts, generally by moving it through paper or gelatin. This can involve some very sophisticated equipment and compounds.

All you need is:

*A black, water-based marker. For the first trial here, I used a Crayola marker.

*A glass of water

We’re going to separate the component colors of a water-based, black felt tip marker. In science-speak, the pigment of the marker is the analyte, the substance we want to chemically analyze. I love using scientific terms with small people.

1.  Fold one coffee filter in half.

3.  Use the black marker to color around the hole. Neatness is not important, though keep in mind that the marker will soak right through the filter onto your work surface.

4.  Place the filter over a glass of water.

5.  Roll another coffee filter into a tube and tuck it into the center of the hole, with the bottom in the water. Make sure the roll touches the edges of the hole, so the water will wick up the tube and begin to soak into the filter you colored. 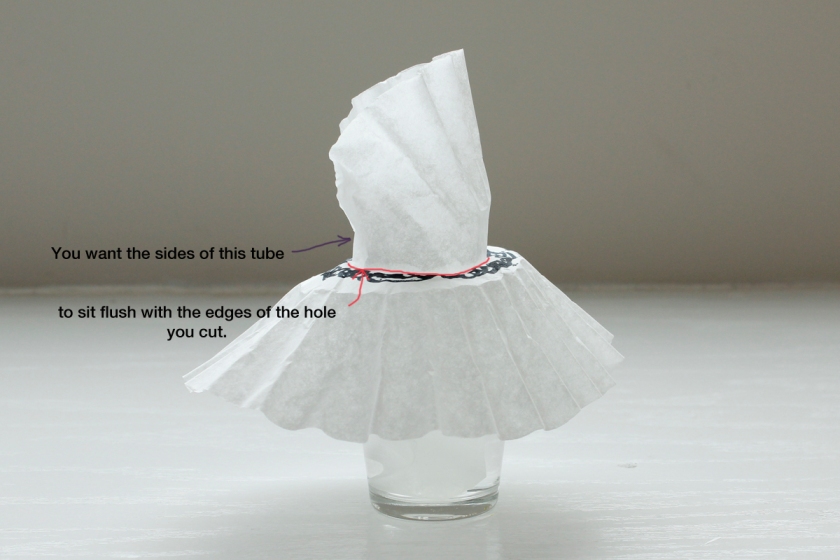 I checked on the progress of absorption every five minutes. Here’s what mine looked like after 17 minutes.

Why would this happen?

I have gotten somewhat confused with this experiment because black is often discussed as the absence of color. According to Wikipedia, black is: “the visual impression experienced when no visible light reaches the eye…Pigments or dyes that absorb light rather than reflect it back to the eye ‘look black.’ A black pigment can, however, result from a combination of several pigments that collectively absorb all colors. If appropriate proportions of three primary pigments are mixed, the result reflects so little light as to be called ‘black.'”

Did that clear it all up for you? Me, neither. But it appears that Crayola may have been lying to us for all these years. That marker is not black, it just looks black. It is instead comprised of pigments that individually reflect a reddish, brown, and cyan light back to our eyes. Somehow, the combination of these works to absorb almost all light.

I got excited and wanted to try other markers. Here are my results from a black Mr. Sketch washable marker:

So then I thought, why not use chromatography to analyze other colors? Mr. Sketch’s purple separated out nicely…

Mr. Sketch’s green was so so…

And then…all the other colors, plus ALL the Crayola markers were terribly boring:

I guess the ‘orange’ pigment was really just a single pigment which absorbs all colors of light except orange, which is then reflected back at us. Or, maybe all the pigment molecules are the same size and weight, so they are absorbed at the same rate. If this is not the case, if anyone can explain to me why orange does not separate into yellow and red, I’d be much appreciative.

I was heavily counseled to do the experiment with a single filter like this:

Although I saved a filter, it took forever, and the results were neither as clear nor as aesthetically pleasing. My advice: use two filters.

Note from Gina: You may also remember doing this in elementary school with paper towels.  Works in a pinch, but not all that well.  Often disappointing.  Plus, the coffee filter method also means you have ready-made designer circle skirts for stufties, hamsters, etc.

What about the science? What’s going on here?

The different colors of pigments which were combined to ‘look black’ have different-sized or weighted molecules. As the water was absorbed by the filter paper, it drew the pigments along through the paper as well. The lightest, smallest molecules were easiest to drag, so those moved farthest up the paper. The larger, heavier molecules stayed toward the bottom of the filter paper.

Click Here for a nice metaphor involving basketballs, bulldozers, and flooding forests that may help explain that concept more concretely for younger kids. FYI:  in that particular blog, they used permanent markers for the experiment, so they used rubbing alcohol instead of water to make chromatography possible. You could try that, too!

Beret Olsen is a writer, teacher, and photo editor for 100 Word Story. She loves toast, the Oxford comma, and all your comments and questions. View all posts by Beret Olsen

3 thoughts on “Chromatography for Beginners”